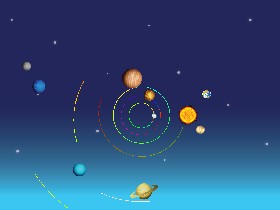 Create an interactive Solar System. Right now, only Mercury and Venus are orbiting. Can you fix the other planets?