“When I decided to launch a Tynker coding club at Miller Middle School, I received 125 applications in 10 days. Our parents and students know that programming is a life skill. Since this was the first time I was using Tynker, and I myself have had little background in programming, I decided to start small with a group of 26 students. It’s been 10 weeks into the program and we’re still having a blast!”

Dave Villafana is a teacher at Cupertino’s Joaquin Miller Middle School, a public school in a school district that’s highly focused on academics. Dave’s been using Tynker since December 2012, and his 26 students have created over 518 projects. View their showcase here. 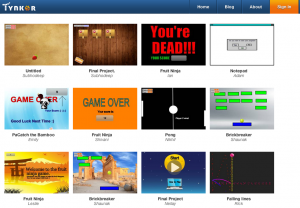 Total Number of Students on Tynker: 26

Ten weeks ago, I launched an after-school program using Tynker.  With occasional support from the Tynker team, teachers at my school were able to successfully teach students how to program. Similar to other after-school offerings, parents paid a small tuition fee for kids to participate.

In the first couple of weeks of the program, we let the students — half girls, half boys — explore and learn. They quickly realized just how much they can build with Tynker. Now they’re creating all sorts of games, applications and interactive animations — equipped with varying levels of difficulty — with very little guidance from us.

Much of what students make naturally reflect on what they’ve learned or are learning in class. Please visit the gallery to explore all the games built. Here is an example of a complete “Catch the Bamboo” game made by one of the students.  Click on the green play button to start the game.

In just ten weeks, students were able to take their ideas and actually turn them into working applications. The projects that they’ve created aren’t easy to make. In fact, some of their applications are quite advanced. Students are able to build things like this because they naturally learn and apply computer science concepts in the process of using Tynker.

Tynker’s support team was awesome. They helped customize our curriculum and create an engaging plan that our students really loved.

We started by using Tynker’s After School Curriculum. Students first learned how to add user elements — create a scene with a background, a main character, and sound. As they made their way through the curriculum, they learned to make their applications more interactive with elements like mouse control, keyboard control, motion, animation, and collisions.

Since a number of students wanted to build games, the Tynker team customized a curriculum for game design. Students were then able to make games that could detect collisions, add scores, use multiple lives, detect win/loss scenarios, and tally high scores.

As a final project, students were asked to build a game or application of their choice. While some built games like Fruit Ninja and Pong, others created math- and physics-based applications like calculators and text editors.

Our 6th-grade students found Tynker easy to learn to use. At the same time, it’s something that they can continue to explore and grow with as they become more proficient with the computer.

The “hardest” part for me has been staying ahead of the kids. You don’t want them to feel like you’re the one asking them the questions and getting help. The truth is, by the end of the program, kids are better at using Tynker than are the teachers. And that’s okay.

An interesting story: there was one point where we jumped ahead two lessons. The kids got lost. Luckily, this was a great opportunity for them to develop their debugging and problem-solving skills. They went back to figure out what they missed or what they hadn’t picked up on, and all of a sudden, it hit them. They were able to connect the material that they’d learned and put it together to complete the project. The logic in their heads translated into the logic in their applications. By using Tynker, students encouraged not only to learn, but also to think, create, and actively apply their knowledge.

At the end of the 10 week program, students learned how to…

Because of our program’s success, we’re now looking to expand it. We’re holding teacher training workshops, considering using it in other grades at Miller, and even suggesting Tynker to other schools in our district.

I personally believe that learning how to program is really key. Students should learn the logic behind the technology that they’re using. This is where all the jobs are going to be, and it’s our job to get them ready for the future.

Do you want to start a program like Dave’s? (Summer is a great opportunity to do so!) Here’s a quick guide to getting it up and running:

More questions? Email us at support@tynker.com.