How to Explain Algorithms to Kids

This is Part 1 of a series on kids learning about algorithms.

How to Explain Algorithms to Kids

The word “algorithm” may not seem relevant to kids, but the truth is that algorithms are all around them, governing everything from the technology they use to the mundane decisions they make every day. Algorithms are fascinating and, although some are quite complex, the concept itself is actually quite simple.

What Is an Algorithm?

An algorithm is a detailed step-by-step instruction set or formula for solving a problem or completing a task. In computing, programmers write algorithms that instruct the computer how to perform a task.

When you think of an algorithm in the most general way (not just in regards to computing), algorithms are everywhere. A recipe for making food is an algorithm, the method you use to solve addition or long division problems is an algorithm, and the process of folding a shirt or a pair of pants is an algorithm. Even your morning routine could be considered an algorithm! In fact, here’s what your child’s morning might look like written out as an algorithm: 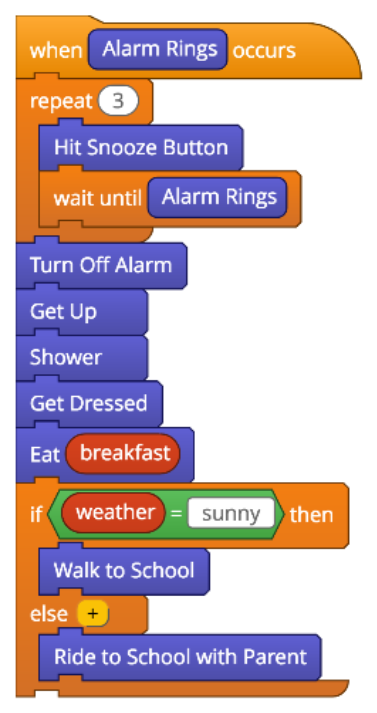 Kids Can Write Their Own Algorithms!

Encourage your child to write out their morning algorithm, or the algorithm for an even simpler task, like brushing their teeth or eating cereal. Without knowing it, they’ll be exploring important computational concepts like repetition (brush bottom left teeth five times), sequencing (put cereal in bowl and then put in milk), and conditional logic (if the bowl is empty, stop eating).

Challenge your child to be as specific with the instructions as possible. Computers don’t understand your intentions, so if you don’t specify that you need to get out the bowl first, you’ll end up pouring milk on the floor!

See How This Algorithm Works

The Benefits of Algorithmic Thinking

Algorithmic thinking, or the ability to define clear steps to solve a problem, is crucial in subjects like math and science. Kids use algorithms without realizing it all the time, especially in math. To solve a long division problem, kids apply an algorithm that they’ve learned in order to iterate through the digits of the number they’re dividing. For each digit of the dividend (the number being divided), the child must divide, multiply, and subtract. Algorithmic thinking allows kids to break down problems and conceptualize solutions in terms of discrete steps in a procedure.

Kids can strengthen their algorithmic thinking skills by completing coding activities on our Hour of Code page. To complete puzzles, kids design simple algorithms based on sequencing, repetition, and conditional logic to solve fun problems. As with all skills, kids can improve their algorithmic thinking through daily practice and by completing creative projects to apply their skills. To learn more about algorithms and problem-solving, try a subscription to our courses!

To read more about the algorithms kids should know, check out Part 2 of this series, Understanding the Basic Algorithms that Power Your Digital Life.