Tynker in the News: GigaOm: ‘Hour of Code’: Tech Giants Join Code.org to Bring Learn to Code Campaign to Millions of Students

Silicon Valley’s biggest companies may fight tooth and nail to recruit programmers already groomed for the industry’s most technical jobs. But they’re taking a much more collaborative path when it comes to courting the country’s youngest hackers-to-be.

On Monday, the ten-month-old non-profit Code.org launched a nationwide campaign to get 10 million students to join an “Hour of Code” during Computer Science Education Week in December and its list of supporters reads like a “Who’s Who” of Silicon Valley.

Companies from Apple to Zynga are backing the initiative with money, resources and time: some schools and educators that participate may receive free storage from Dropbox, enough computers to fill a classroom and video conference calls with big names like Microsoft’s Bill Gates, Twitter’s Jack Dorsey (who will bespeaking at our upcoming RoadMap conference) and Google’s Susan Wojcicki. Other supporters include investors Reid Hoffman, Ron Conway and John Doerr.

In a press conference Monday, Hadi Partovi, Code.org’s co-founder and CEO, said the campaign is asking educators and schools to take an hour out of the school day to introduce students to coding through online tutorials from partners like Codecademy and Khan Academy, as well as a new Code.org tutorial featuring lectures from Bill Gates and Mark Zuckerberg. He said the campaign is also calling on employers and labor unions to introduce programming to their employees and members.

The point of the campaign is “to demystify this field,” said Partovi. “It’s to remove the veil that exists between regular people and [tech leaders].”

It’s obviously an easy issue for top tech companies to get behind, but an increasingly important one when you compare the dearth of computer science classes in schools to the growth rate of programming jobs. According to Code.org, less than two percent of students study computer programming while coding jobs grow at double the pace of other jobs.

But Code.org and its supporters emphasized that the need for more computer science education isn’t just a technology industry problem. As Partovi said, two-thirds of the jobs in software are outside of the tech industry.

From self-driving cars to personalized medicine, he said, software is dramatically changing all kinds of industries. And what will be a constant for future employees of any industry, he added, “is being able to do reasoning in the way that coding teaches you.”

As we’ve covered, in the past couple of years, more startups, like Codecademy, Thinkful and Treehouse, have launched to bridge the skills gap in computer science. Startups like Tynker and Hopscotch have even started reaching out to elementary school kids with colorful games and programs meant to encourage early interest in coding.

Earlier this year, Code.org released a video featuring tech leaders and pop stars to ecourage more people to learn to code. You can take a look here: 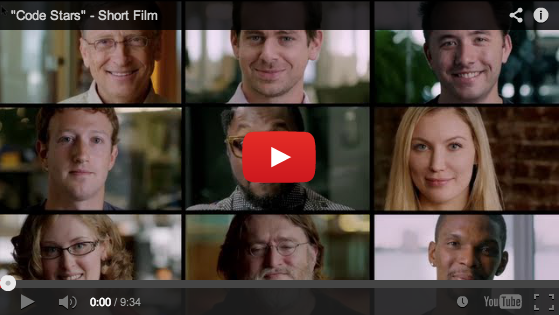