Fabulous 5th Grade Fun: “Hour of Code” and some Kinders!

Today was one of those days that gets you all pumped about being an educator!

I was at our early childhood school today. (One day out of the week I work there.) I spoke with two of the teachers about trying “Hour of Code” with their class. They happily agreed!

“Hour of Code” is part of Computer Science Education Week. It runs December 9-15. It is about promoting students to start programming, but also about bringing coding into the schools.

Before we started I took a poll to see how many in the class played video games. Then, of course, we had to share our favorite games. I explained that in all of those games there is a story about a character and the character is always doing something . . . actions . . . verbs!  We made a list of the various verbs in games they shared. I explained that game programmers need to understand verbs otherwise, they can’t tell a story.

Then, I introduced the Puppy Adventure from the Tynker website. There are several different programming activities on this page. The activities are grouped by grade level. 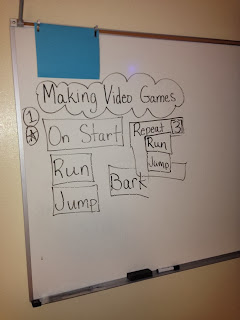 In Puppy Adventure, the poor little puppy gets left behind by his family. The task is to get the puppy back to his family.  The students are given tasks to make the puppy move, jump or even bark. They have to determine how many moves the character will need to do in order to complete an action. The programming is as simple as drag and drop the actions into place. These guys quickly caught on! Finding patterns, problem solving, failure lead to success, patience, sequencing . . . just a few of the skills during this challenge! 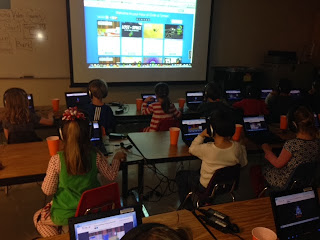 My favorite moment was when a little boy had to have the puppy complete several actions. He had his code ready to go . . . it was pretty lengthy. He clicked START and completely covered his eyes! He could not stand to watch the dog. The look on his face when he finally heard his dog bark and AWESOME flashed across his screen was one of the those, what I like to call, “Goosebump” moments! He was so excited, I thought he might fall out of his chair. Of course, we had to double high-five! You see, this little boy had redone this level about 4 times. He did not want any help. He kept saying, “I can do it.” Perseverance at it’s finest!