Learning to code is all the rage these days, but not in one place that matters a lot: U.S. schools.

U.S. students already significantly lag their global counterparts where math and science skills are concerned. But computer science is in even worse shape: Of 12 technical subjects examined in a recent study by the National Center for Education Statistics, computer science was the only one that declined in student popularity from 1990 to 2009 (p. 49).

Insufficiencies in school can translate into a bigger problem on an economic level. Each year, U.S. companies need to fill almost 150,000 jobs related to computer science and mathematics, but colleges and universities only graduate about 100,000 students with degrees in those fields. 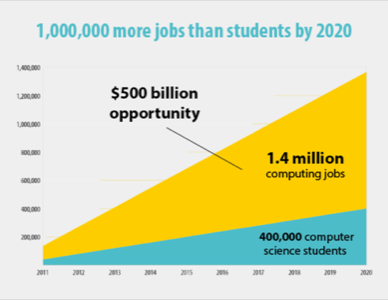 Recognizing the need for an increased focus in computer science courses in schools, organizations like the nonprofit Code.org are teaming up with industry leaders to promote technology education in both elementary and high schools across the country.

Code.org believes all students in America should have the opportunity to learn computer science, and recently announced the first step in its plan to educate them. The Hour of Code initiative is a one-hour introduction to computer science, designed to help kids and educators understand coding. The organization will provide both online and “unplugged,” or paper, tutorials and materials designed to assist teachers with the education process.

“Bringing computer science to every kid is the gift the tech industry needs to give back to America,” Code.org cofounder Hadi Partovi said during the Hour of Code launch event on Monday.

The Hour of Code will take place during Computer Science Education Week, December 9-15, and will encourage teachers to include one hour of computer science in that week’s curriculum. The organization is using game-like tutorials including Angry Birds and Plants vs. Zombies to drum up excitement for coding in the classroom.

Paypal cofounder Max Levchin said that teaching young students how to code is critical for maintaining economic competitiveness in the 21st century.

“I think learning how to code, learning how the vast majority of everything around them works, literally, that is to say Internet of Things, and many other trends like it,” he said. “Having that knowledge will prepare children in the generations to come to participate in the economic development of the world.”