Marky Dewhirst got a wake-up call one evening as she was driving home from work. The radio was tuned to NPR and she heard a discussion that suggested that kids should start learning computer programming in elementary school itself or they would be at a disadvantage. When the host said (only half-jokingly), “My daughter’s behind, I think. She’s 4 and hasn’t started coding,” it made Marky pause and consider. With two older children already in college and one in middle school, she realized that she did not want to lose the window of opportunity with her youngest, William, who is a 4th grader at Travis Elementary.

She immediately began doing her research into programming classes and lessons for William and came up with a shortlist of programming learning options, including Tynker.

When she looked up Tynker, she found many attractive features. “I really liked seeing what other kids had built,” she says. She called William over for a look because “When you first start coding, you basically follow instructions and you don’t really know what you’re working towards.  It is important to children to see the end result and goal and get inspired.”

Marky’s instincts were spot-on because William got very excited looking at the possibilities with Tynker. They signed up for the course and William took to Tynker like “a duck to water!” says mom. “One of the things that I am passionate about is that kids should love learning,” she says, feeling very happy about William’s engagement with Tynker. She regrets she didn’t know about the program when her older kids were in school and is encouraging daughter Olivia to look into Tynker. “It would be great if she learned programming too!”

William is now on Chapter 8 of the course. For him Tynker is also a form of relaxation because, as a ballet student, he is used to 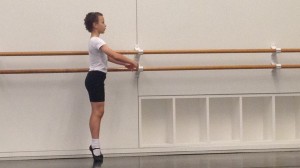 tough drills and intense practices. His arduous ballet training helps him with the many sports he plays, like basketball, ice hockey, and soccer. Tynker is what he does for fun.

“When my friends told me they learned programming, I wanted to try it too,” he says. “I really like Tynker because you enjoy and learn at the same time.” He admits that he loves the fires, explosions, and robots.

With Dylan, his Labrador-mix dog, and a bunch of pet tortoises to keep him company after school, William is working on a program that can make a character talk and jump at the same time. One of the projects he is proudest of involves a visual joke with puppies and a dragon character! Here it is –

The colorful blocks of code are a revelation to Scott Barboza, William’s dad. “I’ve done a lot of programming over the course of my career,” he says. His work at ExxonMobil entails a lot of analytics and advanced prediction models and he has learned Fortran and C. “I can see the fundamental foundations of programming covered well in Tynker,” says Scott. “While I am not sure how sophisticated a program you can eventually make, it is definitely useful to develop computational thinking.”

“And anyway,” he adds, “syntax keeps changing over time, so understanding programming logic is what is important.” And that is why both parents are glad William is learning well with Tynker, and having a lot of fun while doing so!