What do soccer and Tynker have in common? Fun, improvisation, and Saathvik Vangati.

The twelve-year-old soccer fanatic could not believe his parents were sending him off to coding camp in the summer. “Programming is for adults!,” he thought, upset that he would be stuck in a room all week instead of playing his favorite sport and getting some downtime with FIFA video games.

“I thought I’d be bored,” he said. He didn’t think he would understand a thing, not having any previous experience with or exposure to computer programming.

Then he gave Tynker a shot at camp.

“I’m really passionate about soccer. I always play in my free time; it’s a great hobby.” 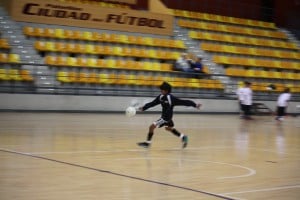 Saathvik first kicked the ball when he was four and fell in love with it immediately. He plays for the Hamilton league and practices two to three times a week, competes in regular matches every weekend, travels for tournaments, and plays at school – hours and hours of soccer every month. In fact, recently he spent two weeks in Spain representing the US in the World Futsal Tournament as a member of the Legends team. Wow! He got to mingle with players from all around the world, share his skills and experience, and learn a lot from the new friends he made.

So when it came to getting Saathvik’s attention, Tynker had an uphill task.

What happened at programming camp?

“It started out really well, kept getting better, and in the end it was super fun. Programming didn’t look that hard anymore!” he said, the excitement palpable in his voice as he spoke to Tynker.

His first project was, of course, a soccer game! His game had two players, one per team, whose objective was to dodge the onslaught of soccer balls. “It didn’t feel like learning at all. It was more like playing,” he discovered. Here is Saathvik’s first attempt to blend his old passion with his new –

To Saathvik, like many kids who experience Tynker for the first time, programming had been an esoteric concept, but Tynker completely changed that perception.

“I love soccer and I like creating things. I paint, I draw, I do a lot of art.”

The fiercely competitive soccer player has a sensitive side as well. His parents note how Saathvik has always doodled and created artistic pieces around the house. Their attempts to give that artistic spirit a foundation and an outlet through formal education had not been successful. The challenge? How to channel that creative instinct into fun yet meaningful activities.

By allowing  Saathvik the opportunity to combine his two favorite things, soccer and art, Tynker rose to that challenge. 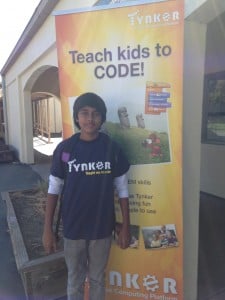 Saathvik found Tynker’s emphasis on visual programming fascinating. Also, the freedom to choose any topic, area, or passion and code something interesting based on it was a key hook, and in sync with his creative spirit.

At camp, he ended up developing several projects and even demoed them on the last day to an audience of parents, instructors and students.

To Saathvik’s proud parents, Sudheer and Madhuri Vangati, Tynker has provided their son with the necessary building blocks and motivation to improve his thinking skills. They believe that exposing Saathvik to programming early in life will give him not just a competitive advantage with respect to his peers, but these core skills can help him make better and more informed choices about his future profession. Sudheer and Madhuri are both from the tech and engineering field and inculcating their passion – “Change the World Through Technology” – in Saathvik has been a big win, thanks to Tynker.

Now that he’s hooked on Tynker, what is Saathvik’s message for you young readers out there? “Do you like video games and stuff? With Tynker, you can create your own games and it’s fun!”

To read more about this multi-talented soccer champ/Tynker whiz/artist, check out his fund-raising page here, and some press coverage here.