John Plattner is a radio enthusiast. He got his first amateur radio license in high school in 1955 and started a business making automated radio systems a few years later. Since then he has seen technology explode during his lifetime, from the development of room-sized computers to microprocessors that fit in the palm of his hand. Along the way he has developed a love for programming and an appreciation for the doors it opened for him and his business of manufacturing audio equipment.

So when John heard Tynker being used in the Hour of CodeTM at his granddaughters’ school in Seattle he was intrigued. “I liked the idea of introducing programming at such an early age,” he says. He looked up Tynker and instantly decided to buy the Tynker home course as a gift for them so they could continue building on the interest developed during the Hour of Code. 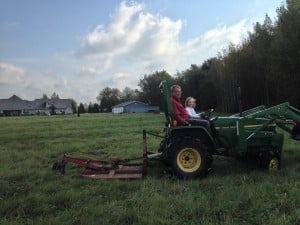 Hour of Code at School with Tynker
John’s granddaughters are Trudie (7) and Marion (9). Mom Joanna is a dedicated parent volunteer at John Hay Elementary in Seattle, where the girls go to school. “The Hour of Code came out of nowhere,” she says. “I made sure I was in the classroom when Marion participated in it on Tynker and immediately saw how intuitive and engaging it was. It was so much fun!” She ruefully admits that it took the grownups a lot longer to figure out how to log in and begin the process than it took the kids to figure out how to use Tynker and start programming. “Also, Marion was still at step 2 while some of the kids had moved on to step 11, so I was really glad kids could work at their own pace,” she adds.

When the kids came home they both logged in and continued to work on the puzzles they had begun at school. When Joanna mentioned to her dad John Plattner how enthusiastic the girls were about Tynker he promptly gifted them the more comprehensive Tynker home course. “He usually saves presents for birthdays and Christmas, so I was really surprised to get his email about the gift,” recalls Joanna.

Gifting Tynker
John’s decision makes eminent sense when he explains, “Taking them to a movie and treating them to popcorn would have cost me as much, and this way they have something that is going to be with them for a long time.” The smart grandpa has also planned ahead. “I don’t live very close to my grandchildren, so when we meet next we are all going to have fun playing around with Tynker.”
Besides, he adds, “Learning programming is like learning a foreign language; the earlier they are exposed to it, the more likely they are to do well at it.”

Why Tynker?
4th grader Marion has been learning ballet for 6 years and has recently taken up the violin. She knows all about the value of slow, steady practice. About her experience with Tynker, she says, “I like that it doesn’t just give the answer but gives a hint.” Piano-playing Trudie is the quick one. She was instantly attracted to the puzzles in the Hour of Code. “Trudie loves the stories and they just pull her in,” says Joanna. “She forgets she is doing something challenging. She forgets she is learning.” 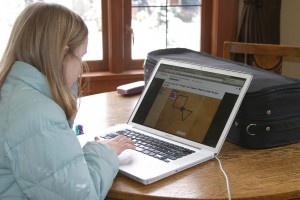 Trudie is working on the spaceman puzzle. “I’m trying to get the spaceman to the power cells. I have to move the spaceship.” Adds Joanna, “[Tynker] is a very healthy way to spend time with the kids. Trudie will call me over when she is having a problem and we will snuggle together and work on it. It can sometimes be challenging for me too – I think she is smarter than me!” Joanna loves the opportunity to bond over Tynker.

Dad Kirk Mattson approves of Tynker’s approach to coding. A software engineer at Adobe, he’d been struggling with a way to teach his girls the logic of programming. “It has to be done in a visual way or they won’t be interested.”

How does he see the transition between the Tynker style of visual programming and what he does at work? “Once you learn to put the logical blocks together, you’ve learnt the conceptual foundation of programming. Learning to write text is the easy part.”

He adds from experience, “To understand these logical building blocks of programming at a young age will be important even for people who don’t want to be software engineers. There are so many jobs that require an understanding of programming.”

It helps that Tynker has given the girls a better understanding of what dad does at work! “I am so impressed with the way Tynker has been able to expose the concepts visually,” he says. “Right now we are just happy to let them play around with it. Later we may give their play some direction.”

Last Word
Says granddad John, “In the beginning is a simple idea. You learn how to take the idea and make something with it. This is what Tynker makes possible. The kids get instant gratification from what they are able to do on Tynker.” He doesn’t expect them to learn programming languages at their age. “The elements are all there,” he says. “As they get older, if they are interested they can pursue learning a formalized language. And if they do, they will find it easier.”

“Consider this: just the act of thinking about an idea, creating based on that idea, and then looking back when it is done is a fundamental expression of what it means to be human.”