As Silicon Valley replaces Wall Street as the destination for the smartest and brightest from American universities, women are being left out of the race.

On the eve of International Women’s Day on March 8, 2014, the statistics of women in computing are shocking. In 1984, more than 37 percent of computer science bachelor’s degrees in the United States were awarded to women. By 1995, the figure had dropped to about 28.5 percent. In 2011 the number slid further to 17.6 percent. (Source: San Jose Mercury News)

Milly Jones just might be the girl to change that slide. And Tynker just might help her do that.

Milly’s fingers fly over the keyboard as she creates her character using Tynker’s media library. She wants her character, a cowboy, to revolve in a loop. In just a few seconds she has pulled up the code blocks she needs and stacked them on the Tynker workshop. Frowning in concentration, she allots values for the variables – how many loops, how much time per loop – and puts in the commands for starting and stopping the program. 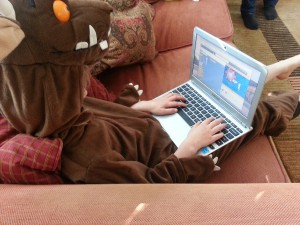 She tries out her mini program and corrects for the cowboy’s movements by moving around the blocks of code. It is fascinating to watch her deftly arrange the blocks and make things happen on screen, particularly since she is only 7 years old.

At 7, Milly is one of the youngest to learn computer programming with Tynker’s home course Introduction to Programming. She completed the entire 16 lessons of the course in just 3 months and has moved on to Tynker’s new course on Game Design, which makes her among the faster learners of the program. Here is one of young Milly’s creations –

“It is my responsibility as a parent,” says dad Tim Jones. “The school can only do so much. After that it is up to us as parents to teach our kids what they need to know.” Tim had already enrolled Milly in Khan Academy’s math and computing modules when Tynker came along. Working on Khan Academy’s tutorials and puzzles was an opportunity for Tim and Milly to bond, but Tim noticed that the syntax requirements in the traditional coding program tended to detract from the computational thought process. “She’s only seven, so she would struggle to find all the letters and characters on the keyboard.”

Tim found out about Tynker from a friend. “When I checked it out, I saw that it was more suitable than Khan Academy.”

Mom Sue also likes the fact that Milly can work on Tynker independently. “I don’t have a background in computing, so I would not have been able to help her at all,” she says. “In the process of going through the 16 chapters, Milly must have asked me all of 3 questions!”

Milly is like any other 7-year-old at Almond Elementary in Los Altos, CA. She loves playing dress-up with her sister Lottie and games on the Disney Channel website. She takes swimming, gymnastics, and dance lessons. She also loves Tynker. She likes the badges she wins at the end of each chapter and she enjoys creating princesses and cowboys and making them dance and fight. Says Sue, “In the mornings she has 20-30 minutes when I incentivize her to get ready quickly so she can get her free time on the computer. She always chooses Tynker! Learning is fun for her. What more could I ask for!”

The reality is that there is no intrinsic reason for girls not to take up and enjoy computing. Sociologists analyzing the phenomenon of declining female participation in the tech industry point to a variety of factors. One is the image in popular culture of a computer professional as an awkward male figure. Another is the spoken and unspoken discouragement of girls from the profession, steering them to princesses and fairy tale castles while boys play with technology and trucks.

Tim is keenly aware of this. As a Google employee, he sees the skewed ratio of women to men in his industry firsthand. “Looking around the campus, the evidence is incontrovertible. There are some great female role models in technology that I have come across, but they are a clear minority.”

But, “My reasons for enrolling Milly in Tynker are purely selfish. I did an engineering degree myself and I don’t want Milly to be left behind in a digital economy because of a cultural bias towards pink princesses rather than computers and math.”

In an article on women and computing in the San Jose Mercury News, Harvey Mudd President Maria Klawe, a computer scientist herself, says, “The difference is, [women] in general are much more interested in what you can do with the technology, than with just the technology itself.”

And this is where Tynker comes in. By making programming about actionable items rather than dry syntax, Tynker opens up the computing world to girls, making them comfortable with it and also showing the practical value of what they are learning and doing.

Says Vidya Mandyam, Director of Engineering at Tynker, “Girls are very good at planning, and typically very focused. We are patient and we also have a number of artistic and creative interests. These are the same skills that are required of every good programmer.”

Tim Jones agrees. Though Milly has developed coding skills and learned a lot about computational logic with Tynker, he says, “I am not looking for any programming deliverables. What I am looking for is confidence. I want Milly to think of herself as a person who can program. She has been able to program some very interesting projects with Tynker easily on her own and this has made her want to do more and feel like she can excel.” 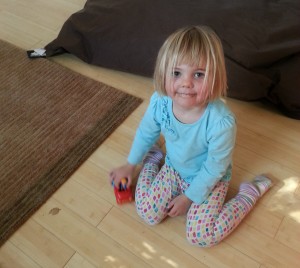 And the best part of Milly’s adventures with Tynker is the effect they are having on her younger sister Lottie. Lottie is only 4, but she is “desperate to Tynker too,” says Sue with a laugh.