Girls learn to code in Namibia

Tynker has been a huge success at an all-girls class in Namibia. Its simplicity and ease of use have made it the perfect vehicle to teach the basics of computer programming. Read on!

Tshuutheni runs a company called Tech Guys in Namibia. For a man living in a country that recently won its independence from South Africa in 1990, he is amazingly ambitious. “My dream is to create a space program for Namibia.” he says. He has been inspired by his childhood dreams of going to space and programs like Space-X. “We know that this is a long term goal and we know the level of difficulty,” he adds.

One of the biggest and most basic challenges to his dream is the paucity of computer learning in his country. As of now it is introduced only at the higher secondary level and, according to a recent study, students of computer programming at the Polytechnic of Namibia (PoN) are  more likely to fail rather than  pass their first course.

Understanding this challenge, Tshuutheni reached out to an organization called Physically Active Youth (PAY), run by a friend of his – Marie Jeanne Ndimbira. PAY was created to support kids from low income households with after-school enrichment programs, a home away from home where they would learn and grow. Marie is as ambitious as Tshuutheni and the program has already created the first black national cycling team and is aiming to send athletes to the Olympics.

The Tech Guys created a curriculum for PAY that included technology, robotics, and programming. While participating in the Hour of Code last year, Tshuutheni came across Tynker. Its monitoring and evaluation aspects were exactly what he needed for his curriculum for PAY.

When the program started in late 2013, the first batch of kids was an all-girls one. “There is such a lack of focus towards girls in this country, we thought it would be very appropriate to begin with an all-girls class to show how much they are valued,” explains Tshuutheni. 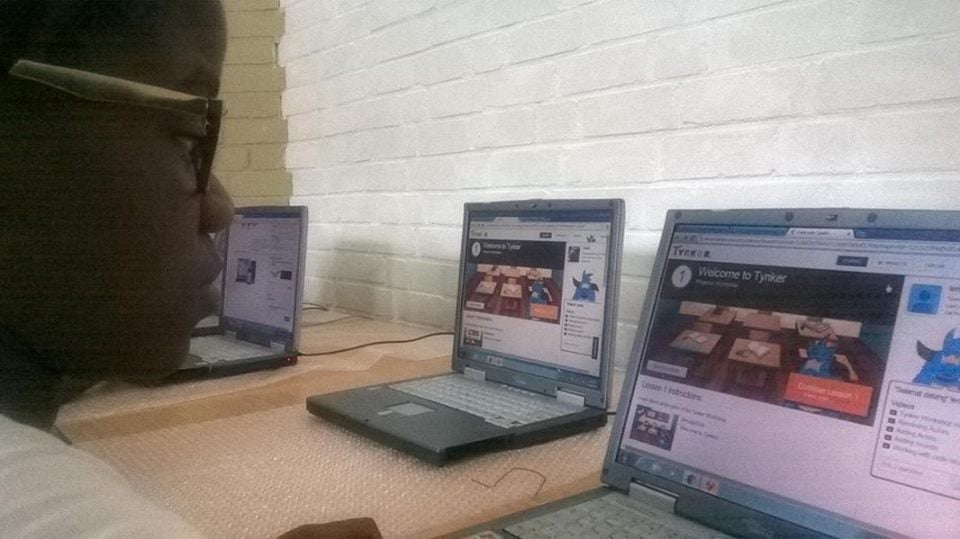 Before they could teach the group programming, however, the Tech Guys team had to first introduce the children to computers! They did this through the Computers Unplugged course where kids would learn about the theoretical and practical aspects of a computer without actually seeing or using a computer. While the kids were learning the basics of binary code and data encryption, the teachers also subtly touched on the cultural issues surrounding women and technology in Namibia. Gender violence has been a real problem in several African countries, including Namibia, and computer literacy is a ticket out of this life for many of the members of the program.

Tynker has been a huge success at PAY. Its simplicity and ease of use have made it the perfect vehicle to teach these novices the basics of computer programming. “They are really inspired,” says Tshuutheni.

Nenad Tomic, who is the academic coordinator at PAY, concurs. “These kids are extremely curious about learning,” he says. “Tynker is something they want to be doing. Given that for 90% of them this is the only place where they have access to a computer, the drive they have is amazing.”

The computer programming class with Tynker was initially made available for 8th to 12th graders but the PAY administrators realized that this would mean the younger siblings would be left home all by themselves. Now Tynker is being used to teach multiple age groups loosely clustered by age. Older kids act as mentors to their siblings when volunteers are in short supply. Tynker’s guided learn-at-your-own pace approach makes it possible for kids of differing abilities to work together.

“The aim is to create a proper pedagogy for computer literacy in this country,” asserts Tshuutheni. And in their humble way, PAY and their Tynker-based program are creating a foundation for that education.